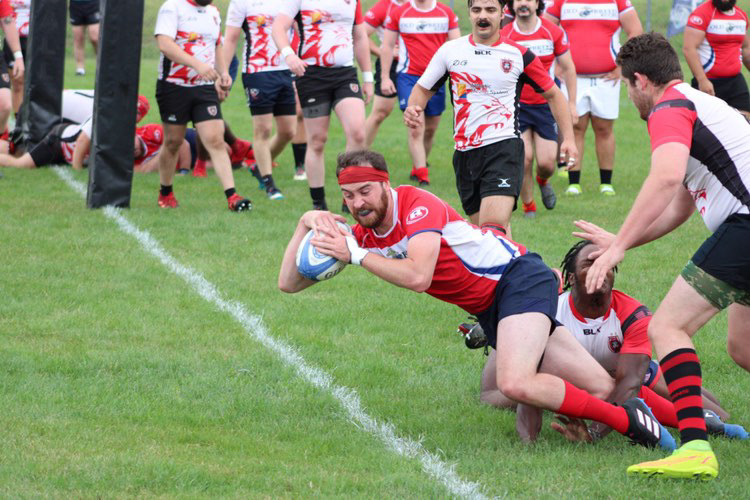 The Old Breed Rugby Club was borne in 2005 from a group of about six Marines who decided they needed a way to commemorate their fallen brethren, Marine rugby players who had died in four years of war fighting. The Club has grown to include players from other branches of the military as well as civilians. Our own Dwight D. Eagan, third-year law student at Albany Law School, is one of only about a half dozen civilians who play with the Old Breed.

The Old Breed is a fixture at the CanAm Rugby Tournament in Saranac Lake, NY, North America’s largest rugby tournament, which was played past weekend. Friday night, as with every year, the Club gathers in Lake Placid to commemorate their fallen. Forty names are on their banner, and their slogan remains:

“We played with them, now we play for them.”

Jeff Nagel started the club after their dear friend Kevin Shea was killed in action. After an opening speech about the mission, the Club remembers 10 different veterans each year with happy and valiant stories including the sacrifices their families have made. After a lot of laughs and tears, each name is read, repeated by all in the packed room, and the bell is rung.

The 40 fallen include members from other service branches who also were connected via rugby. Old Breed’s mission is to fund the permanent endowment of the Lt. Col. Kevin M. Shea Memorial Fund. This fund, administered by the Marine Corps Scholarship Foundation, stands as a lasting memory to one of the Marine’s finest men. Old Breed also collaborates with the Wounded Warriors Project and other charities serving fallen and wounded service members. They also serve as a resource for veterans themselves, available to talk 24/7/365.

We salute Dwight’s passion for the sport and, more so, for making a meaningful contribution to Old Breed and its mission. Old Breed teammates are known not only for their skill, but also their fierce competitiveness, hard hitting, and gentlemanly sportsmanship.

Congratulations to Dwight and Old Breed for a successful Can-Am Tournament!